Ceylon teas have been praised as high quality since being introduced in the late 1800s. They are now recognized around the world for their distinctive aromas and unique tastes. Since the introduction of the tea trade, the growth and manufacturing of Ceylon black tea has been joined by Ceylon green tea. Sri Lanka (at one time called Ceylon) started manufacturing tea on a plantation in Kandy, a major city in the central province of Sri Lanka. Now, black tea is grown in many provinces in Sri Lanka.  While, Ceylon green tea is primarily grown in one province, Idalgashinna in Uva province. Today four percent of Sri Lankan land is devoted to the growth of tea.

Sri Lanka, tea quality is taken very seriously and is strictly regulated by the Sri Lankan Tea Board. They even have a team of tea tasters as well as a laboratory unit who inspect all tea for sale and exportation for quality and food safety. The lion logo on packages of Tea Leo is evidence that the tea is produced in Sri Lanka and is inspected by the Sri Lankan Tea Board. The manufacturer of teas bearing this logo indicate the product is “Pure Ceylon Tea-Packed in Sri Lanka.” Tea Leo lives up to the reputation of world-famous Ceylon teas by selling only teas with this logo. The black teas from high grown provinces present with a honey golden liquid that is lighter in strength. The black teas from low grown provinces present with a burgundy-brown liquid and are stronger in taste. The black tea from mid-grown provinces presents as rich and full-bodied and are stronger in taste. The green tea is full bodied and has a nutty more pungent flavor. With hundreds of micro-climates, there are nearly limitless combinations of brews and flavors. Whatever your preference, there is something about the tea from this island nation of Sri Lanka that is supremely satisfying and leaves you craving more.

Back to Tea Leo 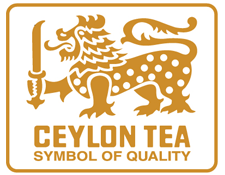 The Ceylon Tea Symbol of quality can be found on all of our tea boxes. Just look for the lion.